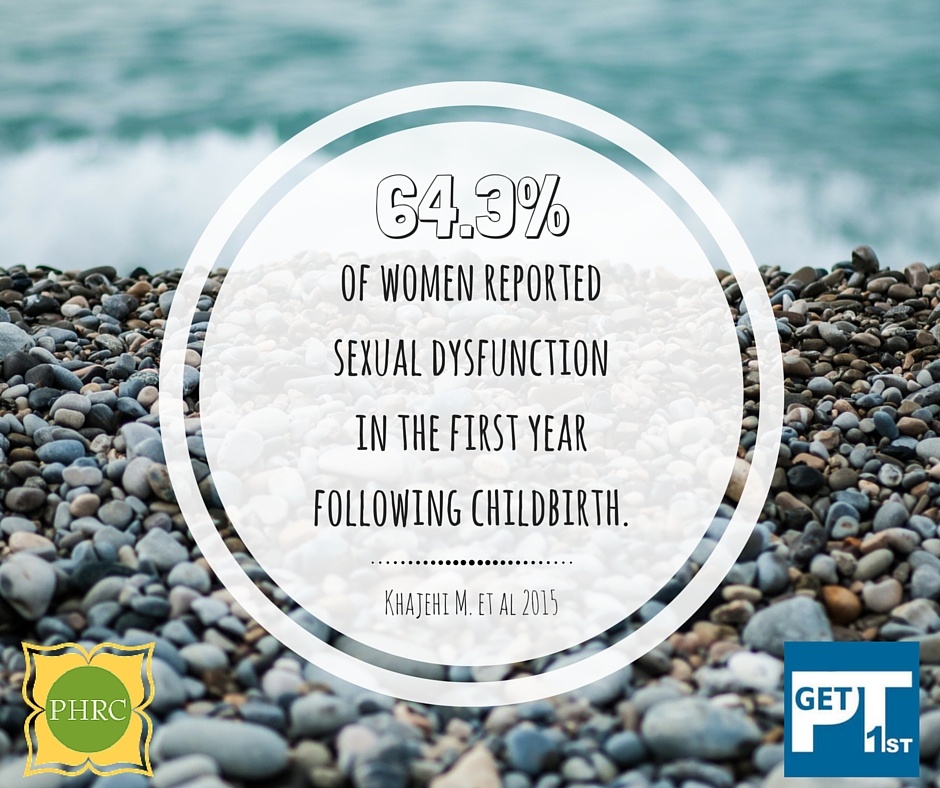 When I initially saw Sarah she was a first-time mom who was 8 ½ months postpartum. Her main concern for attending physical therapy was pain with sex, medically known as dyspareunia. Sarah reported she delivered her baby vaginally. She stated she was in lithotomy position (on her back with her feet in the stirrups, like in the movies) and ready to deliver her baby when she felt a strong urge to push. She started pushing and the nurse had her stop. The nurse would not let her push until the doctor arrived, which was not until 20 minutes later. Sarah reported she pushed once and the baby arrived “fast.” She sustained a 3rd degree tear along the perineum, meaning that she tore from the perineal muscles down to her anal sphincter. Sarah stated she attempted intercourse once, sometime later, but stopped due to severe pain. During her evaluation with me, she described her pain as “like having razors” along the entrance of her vagina. She reported a “hard nodule” right at the entrance, which was painful during sex. Sarah had been unable to participate in sex due to this pain, and had felt discouraged about her plan to have multiple children. She had confided in her friend about her pain and her friend had encouraged her to seek pelvic physical therapy. That’s when she came to see me.

The reason why I assessed these particular components was because I wanted to know whether Sarah’s pain with sex was caused by muscle tightness, trigger points, and/or scar sensitivity. I also wanted to know whether any abdominal wall instability was contributing towards her pelvic floor dysfunction. The pelvic floor can compensate due to transversus abdominis (TrA) muscle weakness and a diastasis recti. Fortunately, Sarah did not have a diastasis recti, and her TrA muscle strength was normal. Her connective tissue was also normal, as was the muscle tone throughout her hips and buttocks.

What I did find with Sarah was scar tissue restrictions along the perineum where the tearing had taken place. The scar tissue was hypertrophic (raised), hypersensitive, and hypomobile (lacking movement). The “hard nodule” she was feeling during sex was this hypertrophic scar. Hypersensitivity to touch along the scar was contributing towards her pain. Guarding from this pain was contributing towards her pelvic floor muscle tightness, eliciting myofascial trigger points, which were then in turn creating more pain and feeding into the pain cycle.

My initial treatment plan with Sarah was for her to come in once a week for 4-6 weeks for a session consisting of scar mobilization (breaking up scar tissue), myofascial trigger point release, Thieles massage, and neuromuscular re-education with emphasis on pelvic floor voluntary relaxation, combined with a home program. This home program initially consisted of perineal massage with scar mobilization and pelvic floor drops. We also discussed proper positioning for bowel movements (because I tell everyone about that), and why kegels were not appropriate for her.

On Sarah’s 3rd visit, I showed her husband how to do scar mobilization, since she expressed a preference for having her husband help. I also educated her husband on perineum massage prior to sex, in order to help decrease the discomfort Sarah was feeling with penetration.

On Sarah’s 4th visit, she reported that she had not been consistently having her husband help with scar mobilizations, and that she was having a hard time reaching the scar herself. We introduced a small dilator to help her with releasing the transverse perineal muscles and softening the scar tissue. In later visits, she reported being very consistent with the dilator.

Sarah completed a total of 11 pelvic physical therapy treatments. I saw her weekly for 6 visits, after which I re-evaluated her and came up with a new treatment plan. She reported a significant decrease in the pain intensity, from 9/10 to 1/10 on the pain scale. I spaced out her treatment to once every 2 weeks, as a result of the improvement in her symptoms, and her compliance with her home program.

On Sarah’s 10th visit, she reported having had sex regularly, however she had felt pain with initial penetration for the first 30 seconds each time. We continued with her treatment plan, and on her 11th visit, Sarah reported having had no pain with sex that week.
Sarah’s symptoms are all too common with postpartum moms, but as you’ve seen in this case study, physical therapy can help resolve these issues, and have a huge impact on a new mom’s quality of life. In my opinion, France, Netherlands, and Australia are doing it right: it’s time we in America caught up.