I recently attended a course with pain researcher and clinical neuroscientist, Lorimer Moseley. He, along with his colleague David Butler, have changed the face of pain science and helped many clinicians and patients understand how pain works. If you want to see Lorimer in action, and explain pain better than I ever could, check out his TED talk (https://youtu.be/gwd-wLdIHjs). I’ve synopsized what I found most applicable below.  All of this pain education should be attributed to Lorimer Moseley and David Butler and the amazing work they are doing for pain science. I hope this information to be an invitation to understanding your pain better. Let’s start the conversation…

So pain, how would you describe it? It’s horrible, awful, unrelenting, unforgettable- in not the good type of way- it’s pain. What’s its purpose?  Well, at it’s base, pain is for survival as a species, to help us learn from our mistakes. That’s why our pain experiences are so memorable. Fool me once snake, shame on me, fool me twice…well you won’t fool me twice. So, basically if our brain detects any possibility of danger or injury to our body, it will produce pain. The purpose of pain is to warn us for a potential for injury- and what an efficient warning system it is. Lorimer recalled a story of his own to explain the effectiveness of this system- perhaps you have a similar story.
One bright morning Lorimer, a native Australian in his native land, was “tramping”, i.e. walking, through the bush, like he had done many mornings before. He was enjoying the scenery, the desert, the rocks, and well, the things of the bush. And, like many times before, he felt a light scratch on his ankle, probably from a twig or something, he thought. It caught his step, but nothing really of note, and he continued on his trek. He visited a nearby swimming hole, took a cool dip, and then turned to return home. And…that’s it…that’s all he remembers. He woke up in the hospital with his leg bandaged, incredulity on his doctors’ faces, and searing leg pain. In actuality, that small “scratch” was no scratch at all, but a snake bike, from the 3rd most deadliest snake in the world! Fortunately when he passed out, he was found by some fellow trampers, carried to the hospital, and quickly given the anti-venom. He soon healed up and learned his lesson, tramping alone in the bush = not the safest idea. So, several years later, he was out again, tramping with some friends. In the midst of talking with a friend, he felt something scratch his ankle. Immediately, searing pain shot up his leg and he crumpled to the ground screaming in agony. Quickly, his companion came to his aid and started organizing how to get him immediate medical attention. Another friend examined his ankle to localize the bite, but to his and Lorimer’s dismay, no bite could be found. A small scratch, similar to something you might get from a twig or something, was all that could be found on his outer left ankle. In the end, that’s all that had happened. A branch had scratched his leg. His brain, the most efficient and effective warning system ever, was prepped to protect, and it did with intense pain. Lorimer, upon recounting the story, was convinced that he even saw a bite mark.

So, what does this mean? Is Lorimer crazy? Some may say yes, but not because of this. This story, and many others, exemplify how pain works. If there is any stimulus the brain determines as dangerous, the brain will protect by all means, with pain, a scream, a fall, even a visual protective response- for self-preservation. The PURPOSE of PAIN is to PROTECT.
A study1 done in 2007 by Moseley and Arntz showed that people given the same very cold (-20 ℃, that’s like -4 ℉) stimulus on the back of their hand along with a blue or red light experienced different levels of pain. Their findings displayed the same protective response. What was the consistent finding? When a participant was shown the blue light with the stimulus he experienced significantly less pain than when that same participate was shown the red light. Interestingly, some participants even reported the cold stimulus as “hot” when shown the red light.

Something even more trippy: do you know what color Viagra is in Italy? Is it blue, like here in the US? No. It’s beige. Do you know why? It all has to do with context. Blue, for most of the world, indicates calm and relaxation, rest and let the parasympathetic nervous system make the magic happen. One researcher found that there were different responses in people based on the color of placebo pill they were given.2,3 Red made the participants heart rate and blood pressure rise. Blue, it dropped. Now, for Viagra, a vasodilator, the last thing you want is a significant rise in heart rate and blood pressure, it kinda defeats the purpose. So, we got our blue pills here in the US. But, in Italy, they got their beige pill. This is because when given to men living in Italy, the blue placebo actually produced an equal rise in blood pressure and heart rate as the red pill. Do you know why? It’s all for the love of soccer: Forza Azzurri! What color is the uniform? Azure, blue. Yep, there is NOTHING more manly in Italy then their soccer team. They even have a national song about it, crushing their enemies and rising victorious. An interesting social experiment, but even more revealing, that our context, experiences, background and beliefs shape us down to our very circulatory and nervous systems. Now Lorimer’s not looking so crazy, is he? 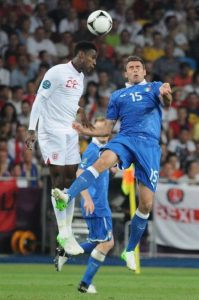 Ok, back to the point of all this-

If our brain is hardwired to protect us, and even just the potential for injury can cause pain, can’t we just turn it off? Well, not exactly. Anyone who has experienced pain knows that you can’t just ignore it to make it go away, not the big pain anyway. Pain is as real as your other protective responses: heart racing, sweating, eye dilating, etc. You can’t just stop sweating, can you? However, what we can do is modify some of the inputs coming in. We can take actions to make our body and brain be more safe. This brings us to the application part of today’s topic. Pain is the output, after our brain decides there are enough danger signals out there to warrant protection.
So, if you are stressed at work, worried about paying off the credit card bills, haven’t slept very well, missed a meal and are moving boxes and feel a “pull” in your back, your brain may just shoot up red flags saying, 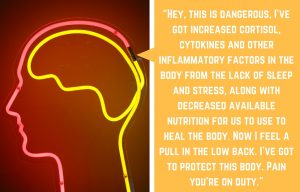 Now pain is not this simple, but imagine instead.
You’ve got everything in control at work, savings in the bank, had a good night’s sleep.  You just ate a nutritious and delectable meal meal with a close friend and are helping him move boxes.  You feel the same “pull” in your back. Your brain may respond differently due to all the the safety signals both circulating in your body and experiencing in your present context. You may feel a twinge, but it will be fleeting, and your brain may say,

This is how we try to look at pain. All aspects of pain. What things make you feel safe: good friends, warm sun on the beach, education on how pain works?  What makes you feel unsafe: that MRI picture the doctor told you was the worst he’s ever seen, unsure if you’ll be able to provide for your family, fear you’ll never get better?  How can you turn down your danger signals and turn up the safety ones?

So overall, this is plain neuroscience.

Understanding this is half the battle.