In my previous post I talked about the anatomy of the male pelvic floor. The blog stirred up a lot of conversation among readers, with many requesting a part two. So here we are! This time, we’ll  take a look at a small part of the male anatomy that comes with a large amount of controversy: The foreskin.

This little piece of skin has inspired a coalition of activists to form called the Intactivists.  Known for opposing circumcision, their goal is to educate the world about the benefits of foreskin. They sport T-shirts with witty catchphrases including “Take the whole baby home!” or “His Body, His Choice!” (Feel free to check out all the options and maybe do some early holiday shopping here). All this fuss over an area of the body made me wonder, what’s the big deal over something so small? Why did doctors even decide to remove it in the first place? Why are people fighting so hard to get parents to keep their sons intact? So, I put on my detective hat and went searching for the answers!

First, let’s start with a basic anatomy lesson. Foreskin is a sheath of skin that covers the tip or glans of the penis. It is also called the male prepuce and is homologous to the clitoral hood, which covers and protects the clitoris in women. Foreskin is comprised of an inner and outer layer, with the outer layer being continuous with the skin of the shaft of the penis, while the inner layer is mucosal tissue, much like the inside of your mouth. In uncircumcised boys, the foreskin and glans are fused together at birth, and slowly separates as a boy ages. Once he hits puberty, the foreskin should easily retract (this is also the recommended strategy to keep the glans and area under the foreskin clean). The foreskin attaches to the base of the penis at the frenulum which is an elastic band and helps retract the foreskin during an erection. When the penis is flaccid, foreskin may completely or partially cover the glans. However, when the penis is erect the foreskin will fully retract and look the same as a circumcised penis. So if in the end they both look identical, why should we even care about it? 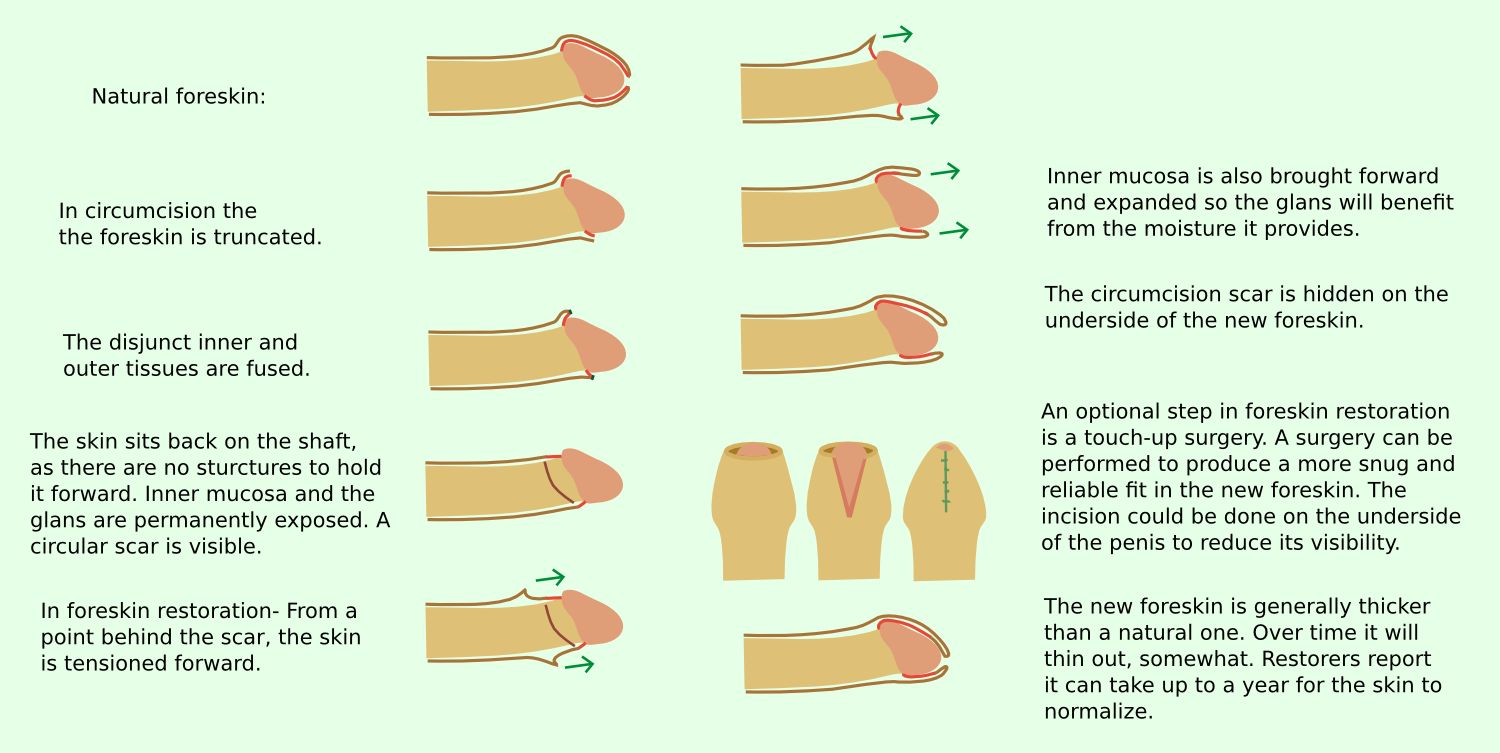 Well as it turns out, other than covering the glans of the penis the foreskin has several beneficial functions (keeping the glans warm for the winter is still debatable) that you may not be aware of.  The foreskin keep the glans moist and well lubricated due to the mucosal nature of the inner layer of skin. When dry skin combines with the skin oils it produces smegma, which is what helps lubricate the glans and some report this added lubrication can help during sexual activity. Some argue that the foreskin is like a little suit of armor for the head of the penis because when circumcised, the penis is exposed to more external stimuli such as clothing, which may cause discomfort or chaffing.

Enter the Intactivists, they believe that this increase in exposure to the glans may lead to decreased sensitivity and sexual pleasure. Furthermore, they also argue that the foreskin is important for sexual function and is considered an important erogenous zone in men. Many believe the foreskin creates a gliding action that aids in masturbation and intercourse to allow for increased sexual satisfaction. Some research has reported increased nerve endings, which are also found in the fingertips and the lips, at the frenulum and in the foreskin itself.  However, research continues to be inconclusive. Now you  may be thinking what I’m thinking; foreskin sounds great! Why would physicians ever remove it? The answer may lie in tradition.

Circumcision is actually one of the oldest planned medical procedures performed. Mostly associated with the Jewish faith, circumcision is part of a ritual performed shortly after a boy is born. However, many other cultures perform circumcisions for religious reasons or as a rite of passage to signify a boy has become a man, or as a sign of bravery. Circumcisions in America became more prevalent in the Victorian Era as a means to prevent males from maturbating. Doctors also recommended removing foreskin to prevent a variety of conditions including: clubfoot, epilepsy, mental illness, convulsions, tuberculosis and hydrocephalus. I even found records that the military recommended circumcisions in the event soldiers needed to fight in the desert to avoid infections due to sand accumulating under the foreskin.

Some research indicates that circumcision helps reduce STDs and HIV infection rates. However, many of the research was performed in regions of Africa so the data may be skewed. The World Health Organization does continue to recommend circumcision for populations at high-risk for contracting HIV to help prevent the spread of the disease. Finally, many people have their son’s circumcised to prevent certain complications that can occur if the foreskin becomes too tight/can no longer retract and restricts the glans (phimosis) or inflammation and infection of the glans, usually due to poor hygiene (balanitis). As you may have caught on, the Intactivists disagree with this too, and argue that these conditions are rare and can be easily prevented with proper hygiene

Perhaps, the biggest, and what I found to be the most compelling argument from the Intactivists as to why one should not circumcise their son, is because one would not circumcise their daughter. Again, the clitoral hood is the same as the male foreskin. So why is it ok to remove something from one gender, but not the other? The cultural and religious ceremonies that make male circumcision a rite of passage rather than a medical procedure make answering this question more complex, hence the controversy around it. Still, Intactivists argue that a man should be in charge of deciding if he wants to be circumcised, and males should be left intact so that they can decide when an adult.

It is definitely easier to keep a foreskin and decide to have it removed later in life; than to remove it only to have the male  want it back. With that said, I found a lot of wild D.I.Y foreskin restoration methods online.  I doubt these are on many Pinterest boards, but they made it onto ours! Check them out here:  However, I highly advise that one DOES NOT attempt to restore his own foreskin with any of these “at-home” methods. They can easily cause damage to your penis or can result in pelvic floor dysfunction because of the consequences of the suggested strategies (trust me, I’ve seen it happen)!

If getting your foreskin back is something you are really interested in, consult with a doctor to see what options may work best for you. More often than not, men seek out foreskin restoration in hopes of improving their sexual function, but other physiological or psychosocial factors may be the cause of their sexual dysfunction. For some men, it may be more beneficial to work with a sex therapist or a doctor who specializes in sexual medicine. On the flip side, some men may wish to undergo circumcision as an adult due to concerns over the appearance of their penis. However like my pal the vulva, each penis is unique so I recommend embracing what you’ve got, foreskin or not! Besides in the end they all look the same when erect, some just get to sport a nifty turtleneck afterwards.

If you are still super bummed your foreskin is no more, at least know that it most likely went to a good cause. Often the  foreskin removed during a circumcision is used for research, to help graft new skin for medical procedures or burn victims or some are used to produce anti-wrinkle skin cream! Man, I love science!  So what do you think? Foreskin or no skin? Any guys out there who wish they had or hadn’t been circumcised? I’d love to hear from you!

Are you unable to come see us in person? We offer virtual appointments!

Due to COVID-19, we understand people may prefer to utilize our services from their homes. We also understand that many people do not have access to pelvic floor physical therapy and we are here to help! The Pelvic Health and Rehabilitation Center is a multi-city company of highly trained and specialized pelvic floor physical therapists committed to helping people optimize their pelvic health and eliminate pelvic pain and dysfunction. We are here for you and ready to help, whether it is in-person or online.

Virtual sessions are available with PHRC pelvic floor physical therapists via our video platform, Zoom, or via phone. The cost for this service is $75.00 per 30 minutes. For more information and to schedule, please visit our digital healthcare page.

In addition to virtual consultation with our physical therapists, we also offer integrative health services with Jandra Mueller, DPT, MS. Jandra is a pelvic floor physical therapist who also has her Master’s degree in Integrative Health and Nutrition. She offers services such as hormone testing via the DUTCH test, comprehensive stool testing for gastrointestinal health concerns, and integrative health coaching and meal planning. For more information about her services and to schedule, please visit our Integrative Health website page. 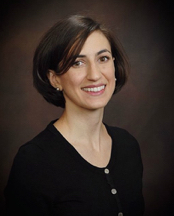 Rachel is a Bay Area native, and currently practices in our San Francisco office. She received her bachelor’s degree in Biology from the University of Washington in Seattle and her Doctorate in Physical Therapy from Samuel Merritt University. Rachel grew up dancing and is excited to have recently returned to the dance studio. Outside of dance, Rachel enjoys going to the gym, discovering new brunch spots and spoiling her adorable niece and nephew.