In a post-Roe world, conversations and questions about birth control options are on the rise. Currently, everyone still has a constitutional right to contraceptives. There are many ways to prevent pregnancy, including oral medications, implantable devices, injectable medications, barrier methods, surgical interventions, fertility awareness, and abstinence. There are advantages and disadvantages for each, so this blog will break each option down to help folks make informed decisions for their own birth control needs.

The birth control implant is commercially known as Nexplanon. It is a very small rod inserted under the skin in the upper arm. It is invisible and can prevent pregnancy for approximately four years. It works by releasing the hormone progestin to prevent pregnancy. Progestin makes it difficult for sperm to get through the cervix and it prevents the ovaries from releasing eggs. The implant can be removed at any time and pregnancy is possible soon after removal. Although the implant is over 99% effective at preventing pregnancy, it does not provide protection against sexually transmitted infections.

The Depo-Provera injection also releases the hormone progestin. Each shot lasts three months and works in a manner similar to Nexplanon in that it prevents ovulation and inhibits the sperm from traveling easily through the cervix. To ensure the Depo shot is most effective you have to get a new shot every 12-13 weeks. That’s about every three months, or four times a year. It is approximately 94% effective in preventing pregnancy if administered correctly, but it does not provide protection against sexually transmitted infections.

An intrauterine device, or IUD, is a tiny t-shaped device that’s inserted into your uterus to prevent pregnancy. It is long lasting, is easily removed, and one of the most effective birth control methods available. There are two types of IUDs, hormonal and non-hormonal. The hormonal IUD releases a small amount of progestin into the uterus which prevents the sperm from fertilizing the egg which prevents pregnancy. Hormonal IUDs last approximately four to six years. The non-hormonal IUD is a copper device, commercially called the ParaGard. It lasts up to 12 years and prevents pregnancy by releasing a small amount of copper into the uterus which prevents sperm from fertilizing an egg. Both types of IUDs are 99% effective in preventing pregnancy, but neither provide protection against sexually transmitted infections.

There are five different brands of hormonal IUDs that are FDA-approved for use in the United States: Mirena, Kyleena, Liletta and Skyla. 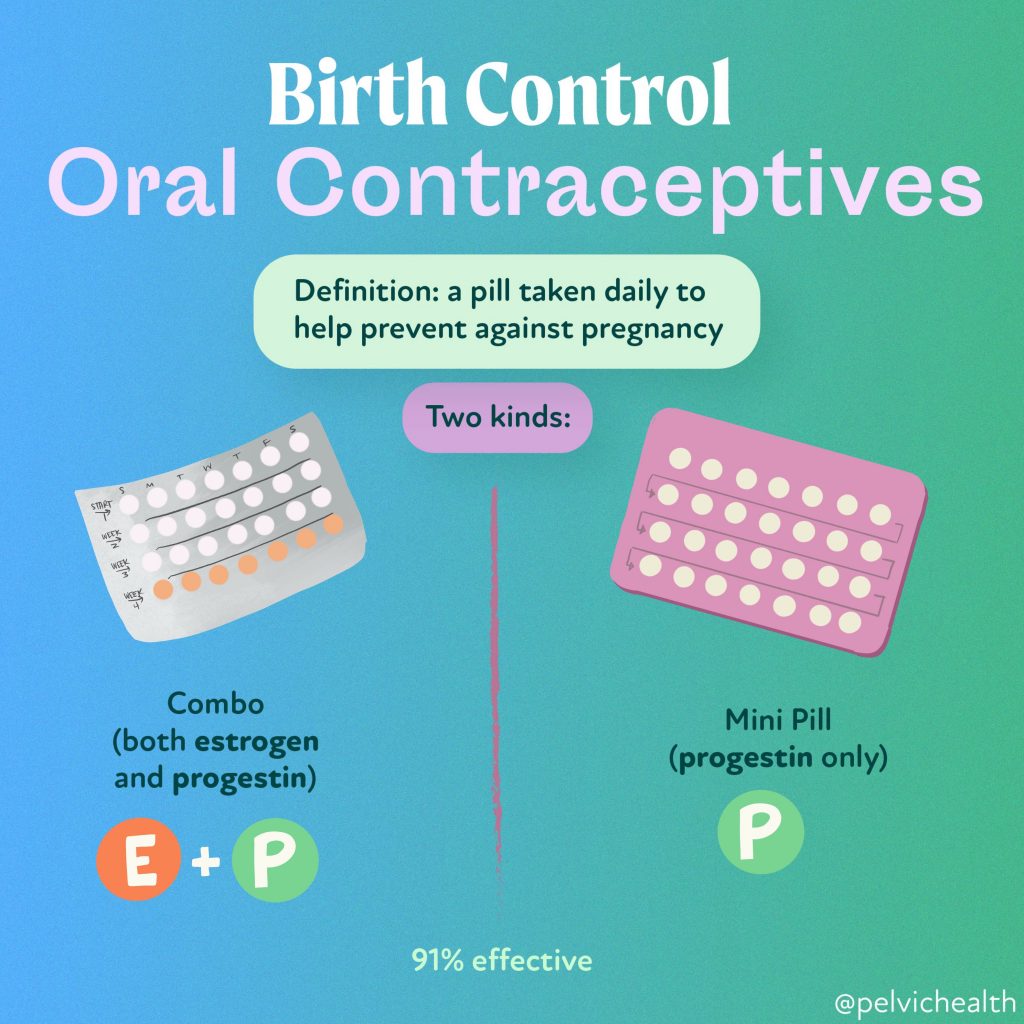 Oral contraceptive pills (OCPs) contain hormones and must be taken at the same time every day to prevent pregnancy. Currently, there are two types of oral birth control pills.

OCPs are often prescribed because they can reduce dysmenorrhea (painful periods) and reduce menstrual blood flow in addition to preventing pregnancy. However, OCPs reduce available estrogen and testosterone which may cause vaginal dryness, painful sex, vulvar pain, and altered vaginal pH which can increase susceptibility to vaginal infections.

The vaginal ring is a small, flexible ring inserted inside the vagina. It is replaced monthly. It prevents pregnancy by releasing the hormones estrogen and progestin into the body which prevents ovulation and sperm from fertilizing the egg. There are two kinds available in the United States, the NuvaRing and Annovera. The ring is approximately 99% effective in preventing pregnancy, however it does not prevent sexually transmitted infections.

The birth control patch is a transdermal contraceptive patch (worn on certain parts of your body: belly, buttocks, or back). It must be replaced weekly. It works similarly as a combination birth control pill in that it releases both estrogen and progestin which prevents ovulation and sperm from fertilizing the egg which prevents pregnancy. There are two kinds available in the United States, the Xulane patch and the Twirla patch. When used perfectly it is 99% effective in preventing pregnancy, but in reality, due to improper use, it is realistically approximately 91% effective. It is not effective in preventing sexually transmitted infections.

The following birth control methods must be used at every sexual encounter to prevent pregnancy if they are the only method being used.

External condoms are considered a barrier method and help to prevent sexually transmitted infections (STIs) in addition to pregnancy by placing a soft plastic barrier over the penis. Condoms, if used correctly, prevent sperm from entering the vagina. If they are used correctly they are 98% effective in preventing pregnancy, however, most people do not use them correctly.

Internal condoms are nitrile (soft plastic) pouches that are placed inside the vagina. They cover the inside of the vagina, creating a barrier that stops sperm from reaching an egg. They need to be replaced every sexual encounter.

Learn all about condoms in a previous PHRC blog by Elizabeth Akincilar, MPT.

The diaphragm is a small device that is inserted into the vagina. It covers the cervix to prevent sperm from reaching the egg. The diaphragm is most effective when used with a spermicide. It is approximately 92-96% effective in preventing pregnancy when used correctly, however it does not protect against sexually transmitted infections.

Spermicide is a non-hormonal option available over the counter that inhibits the mobility of the sperm making it harder for it to reach the egg. It is inserted into the vagina prior to sexual contact. It is approximately 72% effective in preventing pregnancy, however it does not prevent sexually transmitted infections.

Birth control sponges are inserted in the vagina up to 24 hours before sex. It covers the cervix and contains spermicide making it difficult for sperm to fertilize the egg. It is approximately 80% effective in preventing pregnancy, however it does not prevent sexually transmitted infections.

Many couples do not like the barrier methods for varying reasons. A few more options exist that come with their own risks and advantages.

People practicing fertility awareness become aware of their fertile days and either abstain from intercourse on these days or use a barrier method of birth control to prevent pregnancy. Fertility awareness is approximately 76-88% effective in preventing pregnancy, however does not prevent sexually transmitted infections.

The four most common methods of fertility awareness are:

Are you unable to come see us in person in the Bay Area, Southern California or New England?  We offer virtual physical therapy appointments too!

Virtual sessions are available with PHRC pelvic floor physical therapists via our video platform, Zoom, or via phone. For more information and to schedule, please visit our digital healthcare page.

In addition to virtual consultation with our physical therapists, we also offer integrative health services with Jandra Mueller, DPT, MS. Jandra is a pelvic floor physical therapist who also has her Master’s degree in Integrative Health and Nutrition. She offers services such as hormone testing via the DUTCH test, comprehensive stool testing for gastrointestinal health concerns, and integrative health coaching and meal planning. For more information about her services and to schedule, please visit our Integrative Health website page.

Melissa Patrick is a certified yoga instructor and meditation teacher and is also available virtually to help, for more information please visit our therapeutic yoga page.

Do you enjoy or blog and want more content from PHRC? Please head over to social media!