I remember coming of age as a hormonal teen- before the days of google (believe it), hearing whispers about “orgasms”. It was like I went home for summer break with all of my childhood intact and when I came back to school in the fall, my peers were suddenly obsessed. I was bombarded with comments (from both sexes) of orgasms and boners and what “your O face” looked like. I remember the secretive giggles while referring to the Herbal Essences commercials and that scene with Meg Ryan in When Harry Met Sally. Or that time in Friends when Monica drew up a map of erotic zones for Chandler (and seemed to orgasm herself while saying the number 7). One of my friends even told me that 8 sneezes was equal to 1 orgasm…I anxiously awaited allergy season just to see if I could experience one of these orgasms by perfectly timing my pollen intake with my sneeze pattern to see if I could nail 8 in a row, and thus reach ORGASM (never, happened by the way).

I was certainly a late bloomer. I was still watching cartoons while others were getting into MTV. I didn’t have any older siblings, my friends were all my age or younger. But seriously, among all of the Cosmo articles with the tips, tricks, and advice about how to make orgasms better- I just had two questions; what are these glorious, yet elusive things? And why are there so many different definitions?

In the Clinical Psychology Review there are 26 different definitions listed for orgasm. Urban dictionary, listed 122 definitions! Here is one of my favorites: “Repetitive ‘Happy Moans’ indicating you have reached the peak of pleasure.” And they used it in a sentence: “Oh! Yes! That’s it! Ah! I’m having an orgasm!” (I even found one definition about the sneezes.) So, in the this week’s blog post I will attempt to give my best explanation of an orgasm. I realize that orgasms can be a combined experience of mental, physical, spiritual, and emotional components. But, since I am a pelvic floor physical therapist and an expert in the musculoskeletal system, I will focus on the physical aspects of an orgasm.

Before I get too clinical let’s talk about the anatomy. Some of you may remember Rachel’s blogs on penis and vulvar anatomy, which I highly suggest reading at some point. But today, I want to look a little bit closer at what as known as the urogenital diaphragm, the clitoris, and the Gräfenberg “G” spot. 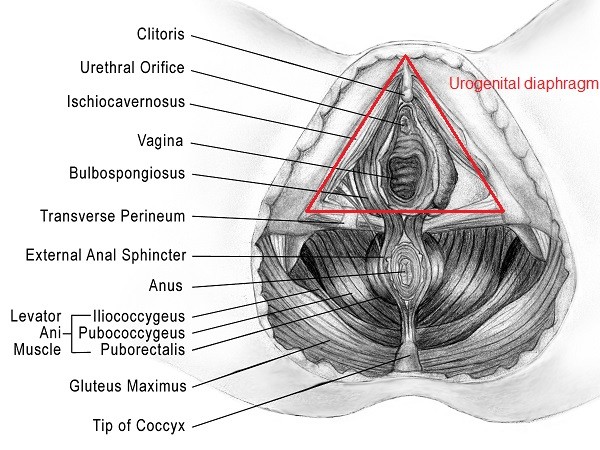 The clitoris is located above the urethra at the intersection of the labia minora and extends vaginally to a point behind the pubic bone. The clitoris comes from the same cells that form the penis in a male.

The G-spot is typically described as being located 2-3 inches inside the anterior vaginal canal near the intersection of the urethra and bladder and may be of the same cells that go on to become the prostate in men. The G-spot is somewhat controversial between experts in the field because, though it has been studied since the 1940s, scientists have neither been able to prove its location nor its existence in women.

Also, the majority of women report that they need clitoral stimulation in order to orgasm, however this is totally variable from person to person. Research suggests that it is pretty common for women to report that they do not orgasm with penetrative sex alone.

Ok now let’s get to some of the more ahem…dry stuff regarding orgasm:

There are 4 phases of the sexual response cycle:

There are obvious differences between male and female orgasms, the most obvious being that male orgasms often culminate in ejaculation; however, there are some sex experts that say that men can learn to separate orgasm and ejaculation. Females can experience ejaculation as well, but it is not as common. Most of the research on this topic is incredibly old and outdated but just last month a study came out of France that explained the some of the mystery of the female ejaculation-turns out that it’s mostly urine coming out of the urethra….thanks France!

Because the superficial pelvic floor muscles are integral to achieving an orgasm, it is important that are functioning well. But what about when these muscles aren’t working as best they can? Here are some examples of issues we come across at PHRC:

All of the above issues can be caused by hypertonic pelvic floor muscles and potential trigger points. Think about it, if we need those superficial pelvic floor muscles to maximally contract and maximally relax once every 0.8 seconds for 10 to 51 seconds, that’s a big deal for those muscles. It’s like a major workout; and if they are already in a tightened state then getting them to further tighten, or relax for that matter, is going to be a problem. People with tight pelvic floor muscles often notice difficulty achieving orgasm or diminished orgasm intensity. This change often precedes the appearance of pelvic pain.

If you are experiencing any of the above symptoms consult with your physician and a pelvic floor physical therapist to address potential issues. All of the issues mentioned in this blog are highly treatable with PT intervention. If you need some help finding a pelvic floor specialist in your area, check out some previous posts on this matter here and here.

*Public service announcement: Can everyone please stop listening to Cosmo when they tell us to do Kegels for improved orgasm? If we are having issues, it is often because these muscles are too tight and trying to strengthen them only causes risk of more problems.*

Ok let me get off of my soap box now. My hope is that after you have read this blog that you will never try to get 8 sneezes in a row just so you can experience a “pseudo-orgasm”. No one experiences orgasms in exactly the same way. And it is because of this inherent variety that orgasms can be hard to explain. But I do know one thing-orgasms are important not only for our mental, emotional, and relationship health but for our pelvic floor muscles too! It is important to understand the anatomy involved and be able to recognize when something is not quite right and seek help.

Readers we want to hear from you! Do you have an orgasm or anatomy question? Please share in the comments section below!