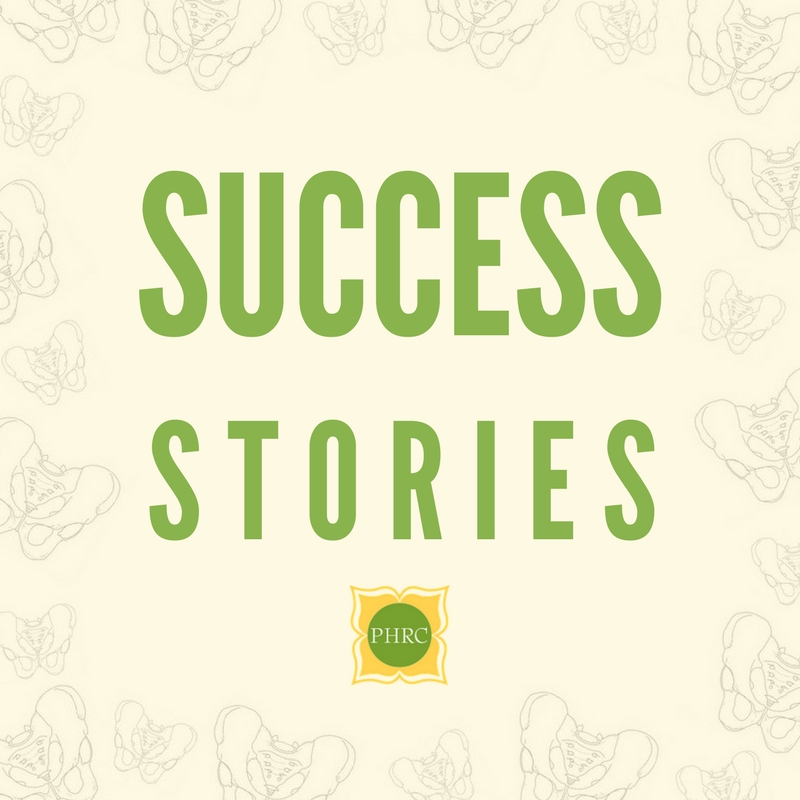 I suffered with pelvic pain for years. I want to share my story, so others won’t have to suffer needlessly.

It started in February 2009 when I tried having sex with my boyfriend. Intercourse was extremely painful, and each time, my perineum tore a bit. I’d be sore for days afterward. Eventually I’d heal, but it took a toll. I dreaded sex more each time.

My gynecologist said I was having sex wrong, and I lost all respect for her opinion. A friend recommended a new doctor; this physician thought I had Lichen Sclerosis. I didn’t think that was the problem, so she did a biopsy to prove it.

The biopsy ruled out cancer, but didn’t confirm that I had Lichen Sclerosis. Nevertheless, the doctor prescribed steroids and other drugs and suggested I join a sclerosis support group. In my heart, I knew this wasn’t the answer.

By then, my boyfriend and I were only having intercourse every couple of months. We moved, and in the spring of 2012, a friend recommended another doctor. I’d been having bouts of urinary tract and yeast infections, and I was a hot mess.

My new doctor suggested removing the offending tissue in hopes that it would grow back healthier. I thought, “The tissue she’s talking about is my freaking vulva,” and I said, “No thanks.” I’d never see her again.

The next doctor was compassionate and specialized in menopausal symptoms and hormonal imbalances. She agreed I most likely didn’t have Lichen Sclerosis but had no other answers. She did another biopsy — a horrific experience. She had to stick me seven times to numb me and didn’t give me anything for aftercare. But she did suggest some things that helped slightly. The tearing still occurred, but it wasn’t as intense.

The biopsy showed I didn’t have Lichen Sclerosis. I consulted a naturopath, who gave me some supplements. It helped slightly; I no longer had yeast infections and UTIs, but I was no closer to a fulfilling sex life.

By this time, my boyfriend and I were incredibly frustrated; our marriage plans were on hold. I was weary of going to doctors and spending money without satisfactory results.

I went to specialists in other states and joined support groups. I saw three different acupuncturists and a Reiki. I found a doctor specializing in Vulvodynia. On examining me, he said I was “very tight” and told me to relax, but I was relaxed. He compared my vulva to a stretched rubber band and explained that this was why I was tearing during intercourse. I was relieved, because I’d never heard this explanation before. He suggested biofeedback therapy.

I was also experiencing severe itching, redness and irritation around my vulva. In the fall of 2012, I went to a dermatologist who said I had vulvar eczema. After meeting both these doctors and hearing their recommendations, I felt such relief that I cried. I was so grateful to finally get some answers!

I found a physical therapist who specialized in pelvic pain. She showed me all sorts of exercises, but said that biofeedback therapy wouldn’t help me. I started seeing a psychologist because my emotions were everywhere. I began thinking I was the crazy one.

After eight months with the first physical therapist, I switched to someone else. I saw her for another four months before I grew tired of seeing only the slightest improvement.

I thought, “Wait, I never did any biofeedback!” Then, I discovered an urgent care facility for women with gynecological problems. I made an appointment and started doing biofeedback. I was thankful that my insurance covered the treatments, and finally I started getting some positive results.

The tearing had pretty much stopped by then, and the pain during sex decreased too. My boyfriend and I got engaged that fall. I was still seeing a psychologist, and my mental health began to improve.

I continued the biofeedback therapy into the spring of 2013. I married the love of my life, who stood beside me through it all. Despite the strain, he never gave up on me and us! Sex was no longer something that I dreaded every couple of months. Now, it was much better, and I could actually have orgasms and enjoy intercourse!

Through my gynecologist, I learned that the Pelvic Health and Rehabilitation Center had opened an office in LA. I visited the website and read a case study. There were many similarities with my situation, so I made an appointment with Stephanie. We talked about something I’d never discussed with anyone: how my sex drive was almost nonexistent. My husband and I would fool around and he’d do everything right, but I wouldn’t feel a thing. I had no real desire; I was just going through the motions. Stephanie suggested that I go off birth control pills and suggested an IUD. She said that sometimes birth control pills can dampen the sex drive and can cause vulvodynia. Looking back, my symptoms began after I started taking birth control pills many years ago. I had no idea there could be a connection to vulvodynia or a loss of libido. (You can read more about this connection here)

Beyond the birth control pill revelation, Stephanie identified connective tissue changes in my pelvic area. She said these changes were causing blood flow and sensation issues during sexual contact. She suggested that the biofeedback may have taught me to relax my pelvic floor muscles, which allowed me to have sex, but there was still pain at the vestibule which could be from hormonal changes from the pill and from connective tissue problems that were not resolved with biofeedback. The treatment for these issues involved a prescription for a topical estrogen/testosterone cream from my doctor and manual physical therapy with her.

Stephanie also recommended yoga and a ‘sugar buster’ diet because of my history of yeast infections. She treated the connective tissue issues with manual therapy; something that had not been done by any of the previous therapists. I truly felt like I was finally going to beat this problem once and for all, and about 8 weeks later, I did.  The manual therapy and the topical hormone cream helped tremendously. I am also using a homeopathic probiotic serum that helps with the chronic infections. It also restores the pH level in my vagina. Now I have feeling in my vulva again and feel as if my body has awakened!

Dealing with vulvodynia is very isolating. It’s a deeply intimate issue. For anyone going through similar problems, I’d recommend immediately going to PHRC or another group specializing in vulvodynia. It is clear in hindsight that my problem came from several problems and until I treated all of them I was not going to get better. I had to treat my infections, my pelvic floor muscles, restore hormonal balance, and address external things like connective tissue that wasn’t helped with biofeedback. Diet changes, yoga, and a psychotherapist helped me cope as Stephanie helped figure out my treatment plan. If I can save anyone from wasting their time and money on ineffective treatments and dealing with the emotional stress I did, telling my personal story will be worth it.