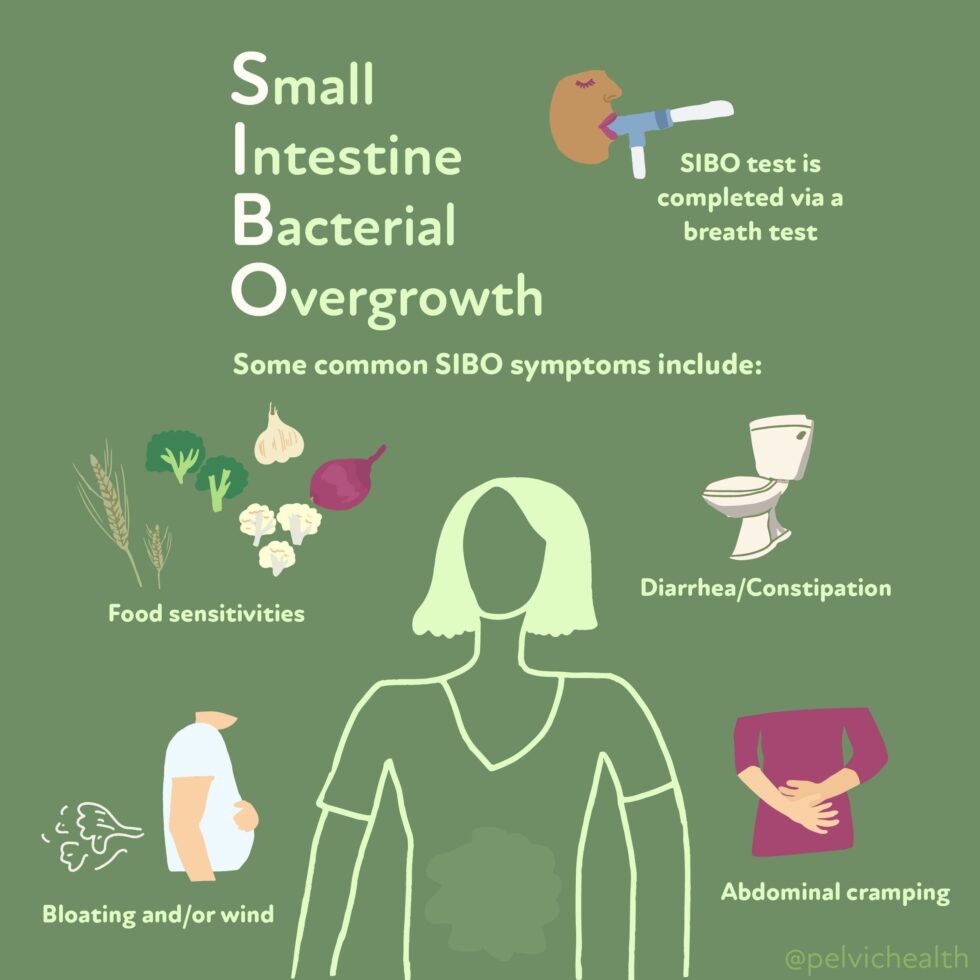 In today’s blog I want to provide some more education about SIBO, how we get it, test for it, treat it, and how it has made its way into pelvic health concerns as well as the most recent updates.

First, it is helpful to know a little bit about the digestive system aka your GI tract, and anatomy before diving into more SIBO facts. Your GI tract begins in your mouth with your tongue and all the enzymes that are in your saliva that help to break down food. Then, food travels down your esophagus into your stomach where it is further digested. Acid helps to kill bacteria and help with protein digestion as well as other processes to help with B12 activation and absorption. Then food moves into your small intestine, where you continue to digest your food and absorption of nutrients begins (hint: this is where SIBO occurs!). Once this process takes place, food moves into your large intestine also known as the colon through the ileocecal valve where it can be used to feed all of the good bacteria that is supposed to be there, and it eventually gets moved through to the rectum and out of your body on a daily basis (hopefully!). 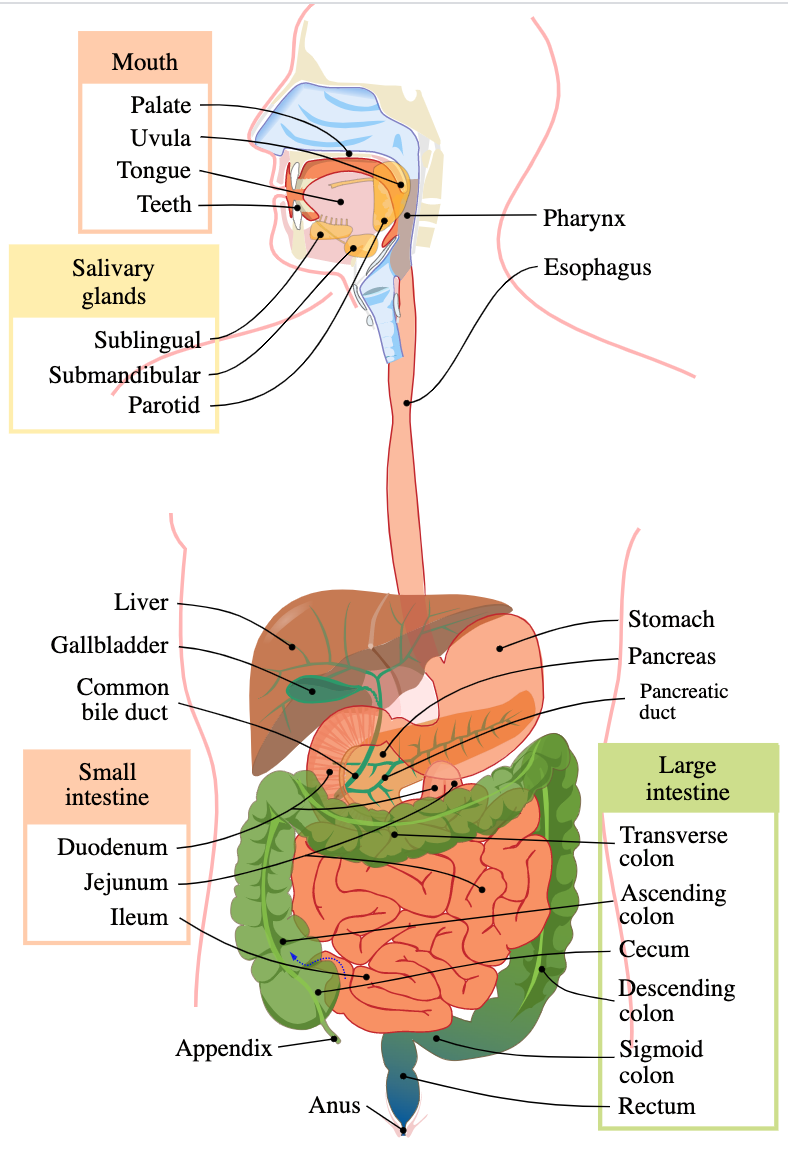 SIBO is essentially a subclassification of IBS and it has been reported that approximately >50% of the patients with SIBO have IBS (Chedid, 2014). SIBO is essentially the GI symptoms in the presence of overgrowth of hydrogen-producing bacteria in the small intestine. However, in many years it was also thought to be an overgrowth of methane-producing bacteria; however, recently there have been updates to distinguish this from classic SIBO which I will address in the updates section.

The classic symptoms and/or the associated issues with SIBO include:

These symptoms occur because the bacteria that are overgrown love certain types of carbohydrates, ones that can be fermented, these are termed FODMAPs, or fermentable oligosaccharides, disaccharides, monosaccharides, and polyols. Many of you may recognize the term “the low FODMAP diet” and that is a diet many people are recommended to go on to help with symptom reduction.

Foods high in FODMAPs include:

It is important to note that these bacteria also respond to foods that are low in FODMAPs, but consumed in high quantities such as wheat and other fruits and veggies consumed in high quantities in the Standard American Diet also known as SAD. To find out more about the low FODMAP diet and foods that are high/low in FODMAPs, check out Monash University here.

Later in the blog, I will discuss some recent updates from Dr. Pimentel, who is one of the primary researchers and practitioners. He recently published an update on the clinical guidelines this year. One of the updates, though, was on methane vs. hydrogen SIBO. Methane-positive breath tests were previously considered SIBO; however, it is no longer classified as SIBO because methane-producing organisms are not bacteria, they are archaea. Therefore, the name SIBO which implies bacterial overgrowth is no longer accurate, and methane-positive “SIBO” is now called “Intestinal Methanogen Overgrowth” or “IMO.”

Why do we get SIBO?

As Dr. Pimentel has stated in various interviews SIBO is the result of some other underlying problem. Listed below are some of the primary causes and/or predisposing triggers for SIBO, the issues below are not listed in any particular order.

Most of the research that is done when studying SIBO uses a biopsy or culture of the small intestine which can then capture the number of bacteria present. This method is also used in some clinics that diagnose and treat SIBO but is not the easiest or most feasible to do. Typically a breath test is used either in the clinic or a take-home test is given.

The test uses a solution, glucose or lactulose (but usually lactulose), that is consumed and then one would blow into tubes at 20-30 min intervals which are then analyzed for the amount of hydrogen and methane gas that is expelled. If there is a specific amount of either gas at certain time points, the test is positive for overgrowth and there are a number of treatment options available.

The gold standard is the biopsy; however, this is not very easily performed; therefore, the breath test was created. The take-home test is, of course, the most convenient but it does require some preparation and planning and there can be high user error so it is important to have someone direct you on how to take this test to minimize user error.

Additionally, stool tests like the GI effects and GI-MAP can give us some indication about bacterial overgrowth and can also test for H. pylori. Of course, the GI symptoms that describe SIBO can also be other issues with the gut such as poor diversity in the microbiome and food sensitivities for instance. These tests allow for a more comprehensive assessment of the gut, looking at digestion and absorption, infection and inflammation, and overall gut diversity as well as pathogens (bacteria, fungus, etc).

So how does this relate to pelvic health? Well, SIBO and IMO are often overlapping issues with pelvic health disorders when it comes to bowel health (constipation & diarrhea), endometriosis, and interstitial cystitis.

Treatment of SIBO usually requires the use of either antibiotics, or natural agents can be used as well. Typically antibiotic use consists of Xifaxan +/- an additional antibiotic depending on the result of the breath test. Alternatively, a variety of natural agents can be used. Treatment may last for two to four weeks which is usually followed by a restrictive diet such as the low FODMAP diet to continue to restrict the growth of the bacteria.

A study in 2014 looked at the comparison of the treatment of SIBO with antibiotics versus herbal or natural therapies and showed that both showed a moderate improvement equally. Recommendations included that patients should have a choice between which they prefer and those that were non-responders should attempt to treat SIBO with herbs if they failed antibiotic therapy. Clinically, it is not uncommon to see multiple rounds of treatment to help reduce, or eliminate SIBO treatments.

Recently, Dr. Pimentel has updated the clinical guidelines on all things SIBO and has now distinguished excessive hydrogen vs. methane-producing bacteria. Classically, when there is an overgrowth of bacteria, this is usually related to hydrogen-producing bacteria and is more associated with diarrhea whereas previously methane-dominant SIBO is now named IMO or intestinal methanogen overgrowth as the methane producers are not bacteria, they are classified as archaea. This is an important distinction because they are not bacteria and they require different treatments and clinically present differently. Methane producers usually are more associated with constipation. There is another type that is predominantly hydrogen-sulfide (H2S) producing and can cause issues as well. There are some indications on the breath test that this is what is happening and a classic sign is smelly gas, because it is sulfur gas, so you may notice smelly gas or bowel movements that smell like rotten eggs, this may be what is going on.

As a nutritionist specializing in gut and pelvic health, these are tests that I can offer my clients that I currently work with. To schedule a consultation or get more information you can go to www.pelvicpainrehab.com/nutrition or call 760-487-5118.